You start in blank room, but then massive blocks appear  above your head and tries to squish you to the pulp. How long can you survive?

Woow this is a really interesting interpretation of the word 'blank' from the theme! I'm really impressed you managed to make this much in such a short time! I find this to be a really fun and refreshing way to control where blocks land.

I found that it is a bit difficult to control where the blocks land because they fall rather quickly after they spawn. Also, sometimes I can't see where it is before it starts to fall and so I won't know what type of block will land or where it will land.

But when the bricks land the way I want them then it is really satisfying. I feel quite like a pro when I manage to land it so that it is right above the players head haha.

I think this idea has a lot of potential! Maybe it would be interesting to make it into a co-op two player game where one controls the character and the other controls the tetris blocks? Just an idea :))

I never managed to do it, but do you get points when filling up an entire row?

This is a very clever idea and it looks great!

It's a bit too brutally difficult for me... I can't really get anything done with it...

By the time I can tell what block it is, it's already decided where it's falling, and I couldn't possibly traverse the map fast enough to get it in a place that works for me...

But I can't help but like this game. I love smart twists on classic basic staples like Tetris, and new combinations of genres. It's always so great to see. I don't think this came out as particularly manageable or fun in this brief iteration, but it's so smart, and I love seeing it. The presentation is great. I feel like this could be iterated on into something rather fun, but as a TriJam project in its current state, it's still really excellent. 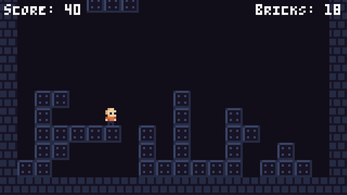